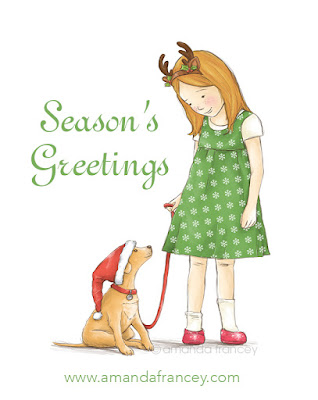 Above is an illustration of my daughter (who had been wearing reindeer antlers since November) and our new puppy (who would much rather be bouncing out of the picture with Santa's hat tightly secured between her teeth).

We're now onto our second day of 2016 here in Australia, so Happy New Year too.

Things have been very quiet here, illustration-wise, for the last 8 months, as I've had a few personal things to attend to, and I've been busy moving house and settling back into the leafy edges of Brisbane, near where I grew up. It's so lovely to be among the gum trees once again. Being surrounded by nature fuels my energy and inspiration, so I'm hoping 2016 will bring an abundance of creative zest my way.

I do have some exciting news to celebrate the New Year with however ~ my new website is now up and running, I've given this blog a well deserved facelift (after long neglect) and my third picture book is going to be released April this year!