This video shows my illustration process in fast forward. I scanned my pencil drawing and greyscale watercolour washes, then coloured in photoshop.

I originally illustrated this for the cover of, Take Ted Instead, a picture book written by Cassandra Webb (New Frontier Publishing, 2016). However, I had to change the orientation layout of the boy and Ted to standing position, so the illustration would fit nicely around the words. 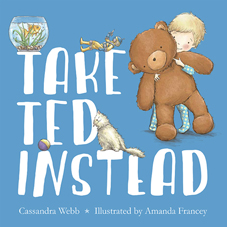 It's bedtime for one tired little boy. Why should he go to bed
when everyone else in the house is still awake?
He has a plan to keep himself wide awake.